If it has an electrical cord it is covered here.
Post Reply
55 posts

Scotch-Brite Surface Conditioning discs, available in a variety of sizes, might be worth a trial too, and are supposed to be suitable for cast iron. They are available in various grits. I am thinking of giving the Very Fine grit ones a try on my table saw table, testing on a small area first. They are hook and look so they will go right on a 4.5" sander, like a Rotex.
Top

Here’s before and after #1. I removed the rust with Rust Free and a white scotchbrite, cleaned up with mineral spirits, then reapplied T-9 and paste wax.

Before (I only shot one side; gomen!): 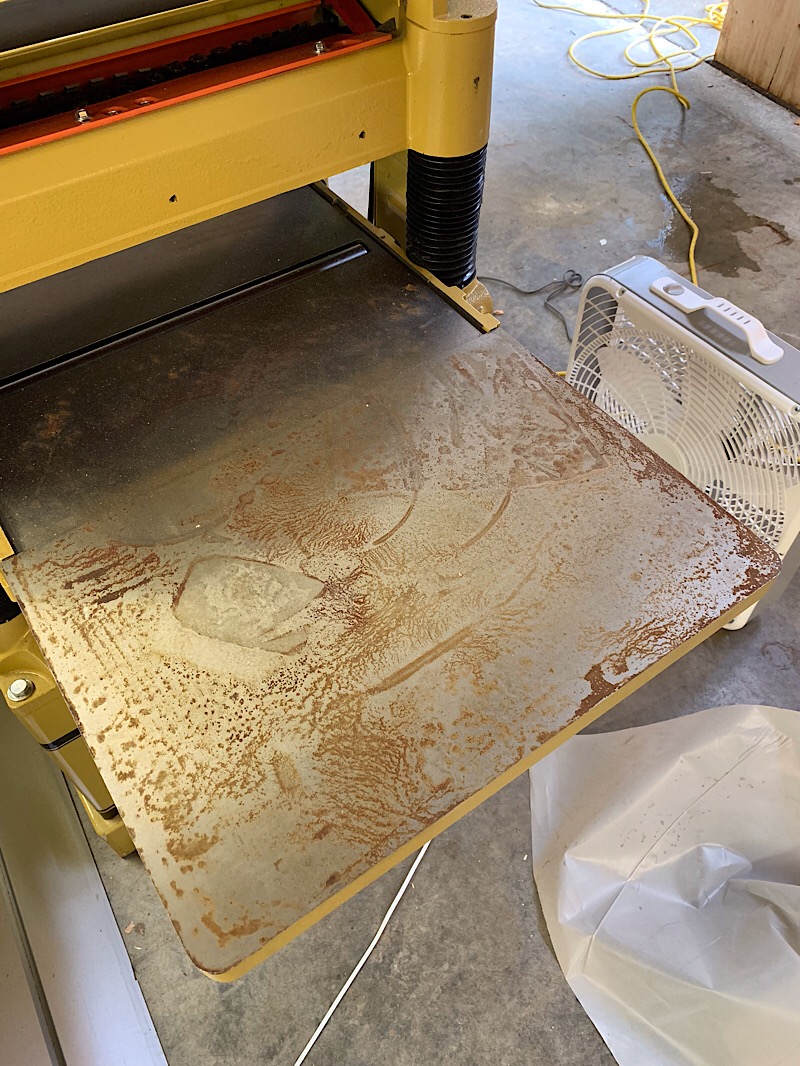 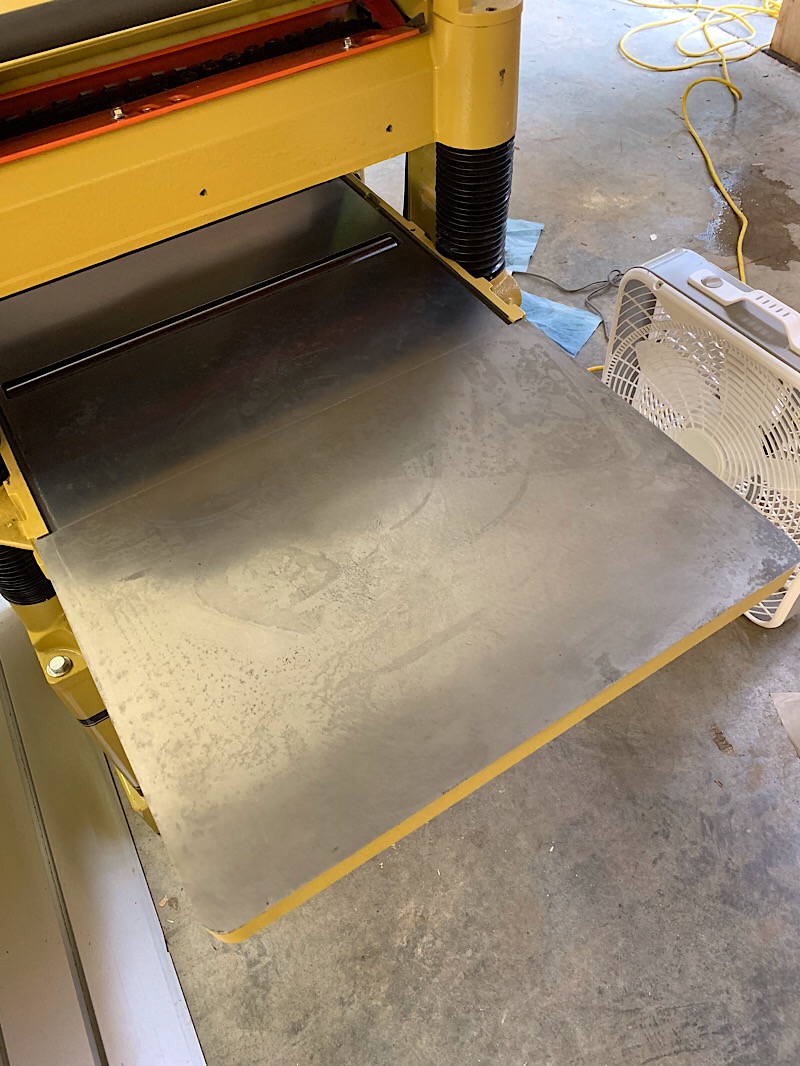 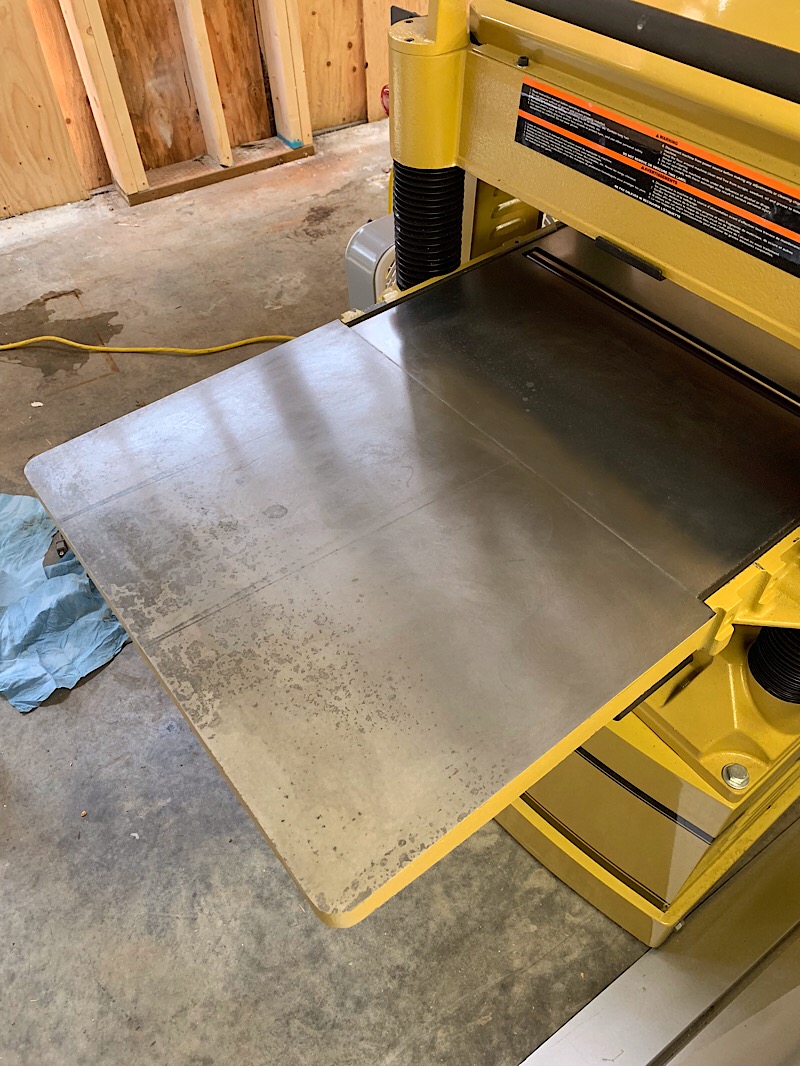 Fortunately only the extension wings were really hit. The planer head was completely protected and the main table got only minor spotting. I’ll need to retouch the one extension wing, as there are some small but determined rust spots that weren’t fully removed in this pass.

Next stop is the jointer, which will be a bit more work. The fence needs to be pulled off entirely for clean up, and both tables need work. Also, some water did get on the head so I’ll need to triage that. Only minor obvious rust, but I’ll need to see if bearings got hit, etc.
John Whitley | admin@craftsmanshipinwood.org
Top

Kicking the can down the road a bit:
There's a fair bit of work yet to go before I'll be fully up and running, but the blocking items that required professional help are now all on the road to completion. Soon I'll be in the delightful state where only my own elbow grease stands between me and a working and fully tuned-up wood shop.

I think my biggest remaining uncertainty is how well the sliding table saw is going to work out. Echoing Chris' recent post on the Wadkin, I will likewise at least leave my saw in better condition than I found it.
John Whitley | admin@craftsmanshipinwood.org
Top

Another quick update: after a seeming interminable period, I have completed the shop electrical layout, including some redundancy to allow for flexibility in equipment locations. Electrical and interior redo (new insulation, drywall, etc.) will be happening soon. Oh, and replacement garage doors, as the originals were 1) terrible and broken homeowner DIY jobs and 2) unceremoniously removed when the carpenter ants were discovered. Did I mention carpenter ants? ... ...
John Whitley | admin@craftsmanshipinwood.org
Top
Post Reply
55 posts