Well David I hope those are your second set, because they look pretty darn good to me! I'll sure be happy if mine turn out that well centered. 7/32 is a good idea too, better than 3/16. I think I will do that.

The idea of doing a extra cap or two first as a test is a great idea. The caps were actually pretty easy to make up so it will be quick and It'll give me the confidence in my measurements.

I will cut my cap width to 2.75", but I wouldn't mind seeing your thoughts Chris on how long the lid should then be, and how far from the ends the battens should go.

Did up a test cap, drilled a few holes to verify alignment. Circles in pencil show the test holes are lined up well.

Looked pretty good so I went ahead with the real caps. Used the horizontal mortiser with a 4 fluted end mill.

Leaves me with a fair bit of clean up, but I am happy with the alignment. Onward!

I will be writing a bit more on the fitting of the lid, and my apologies for not getting to it yet. Today was a little busy but tomorrow is looking better.

Finally I get a moment to address Dan's question about the fitting of the lid battens in relation to the opening.

I see you've chosen 2.75" for cap width, which is fine. With the end wall of the box being 0.5" wide, and the handle adding a further 1.0", the portion of the cap sitting atop both end board and handle is 1.5", leaving 1.25" sticking out into space on the inside portion of the box. The amount of cap width which sticks out into the box has several consequences:

1) the further it sticks out into the box, the more the length of the box opening is reduced.
2) the wider the cap piece the greater its leverage against the floating hell tenon pins if it were grabbed and twisted (as someone might do if picking the box up with the lid out).
3) if the cap is made narrower, the problems from (1) and (2) are mitigated somewhat, however then the amount of cap left to engage with the lid becomes less and this may make the lid connection less secure when it is installed.

The range of distances which I would suggest are most ideal for the cap to project into the interior box space are on the order of 1.0"~1.25". On my tool box, I made the cap 2.625" wide and therefore the amount of cap sticking out into the box is 1.125": 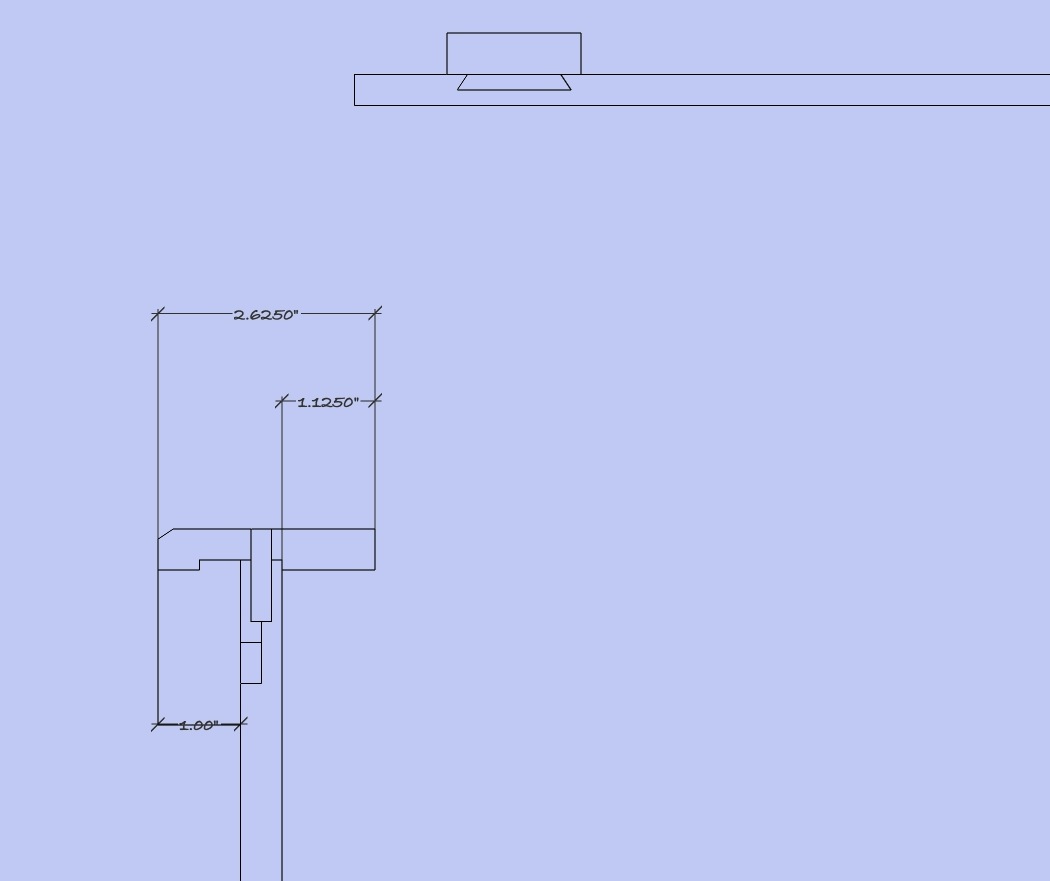 The lid is tipped up and slid under one of the caps to begin the process of putting the lid in place. Since the cap sticks out 1.125", the maximum distance the end of the lid can be inserted is 1.125" Therefore, the batten on that end of the lid must be offset at minimum 1.125". Since it is possible, if the cap were flat-grained stock, that the cap could be shrunk in width at certain dry times of the year, the fitting of the lid into the space would be affected in that the end of the lid would tend to scrape against the inside of the box end wall when the lid is tilted down into position. Therefore, it might be wise to move the lid batten another 1/16" closer to the end of the lid so that there is no possibility of scraping. 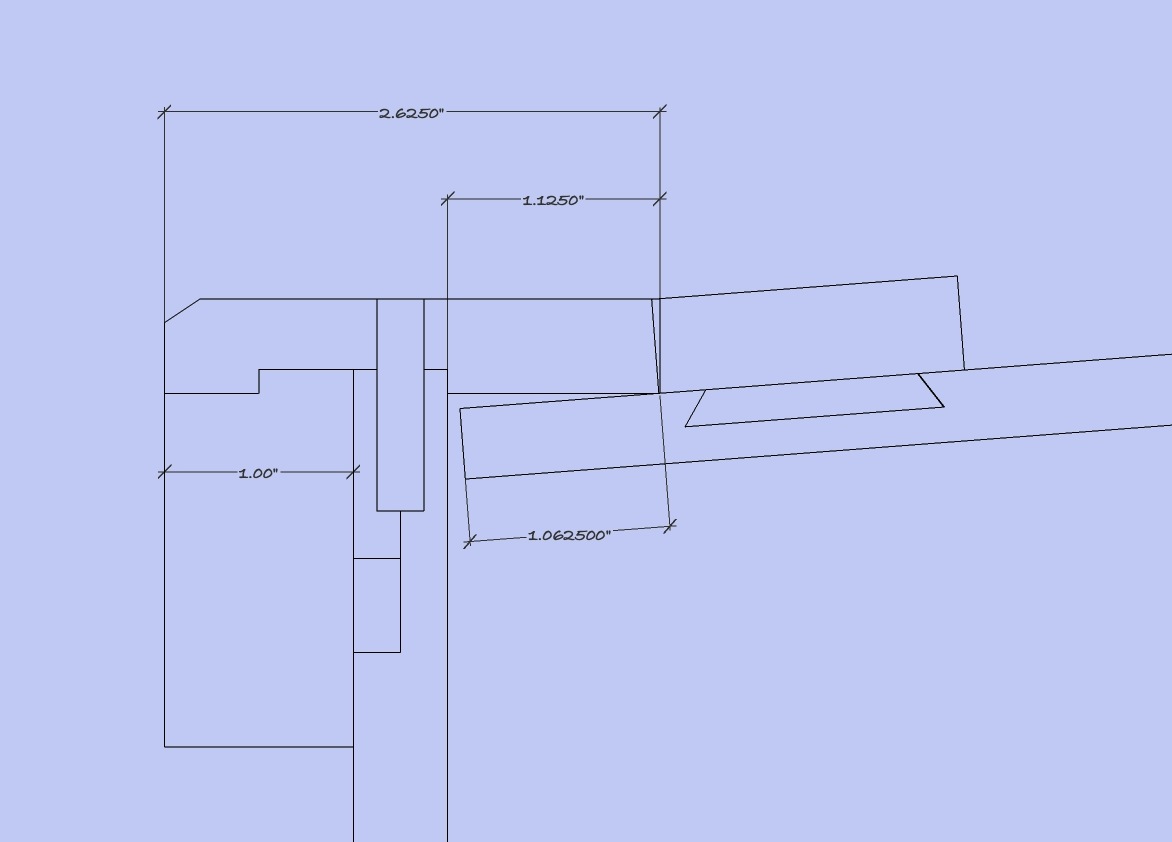 Given that piece of information, you are halfway to determining the fit. With one of the lid inserted maximally, until the side of the batten bottoms out against the edge of the cap, you would next tilt the far end of the lid down into the opening. The opening is the distance between the inside edges of each cap - let's call it 'X'. The length of the lid, as measured from the outer edge of the batten butted against the cap, needs to be a bit less than 'X' so that the lid can drop down through the opening. I would suggest making this length 1/16" less than the opening, or X - 1/16": 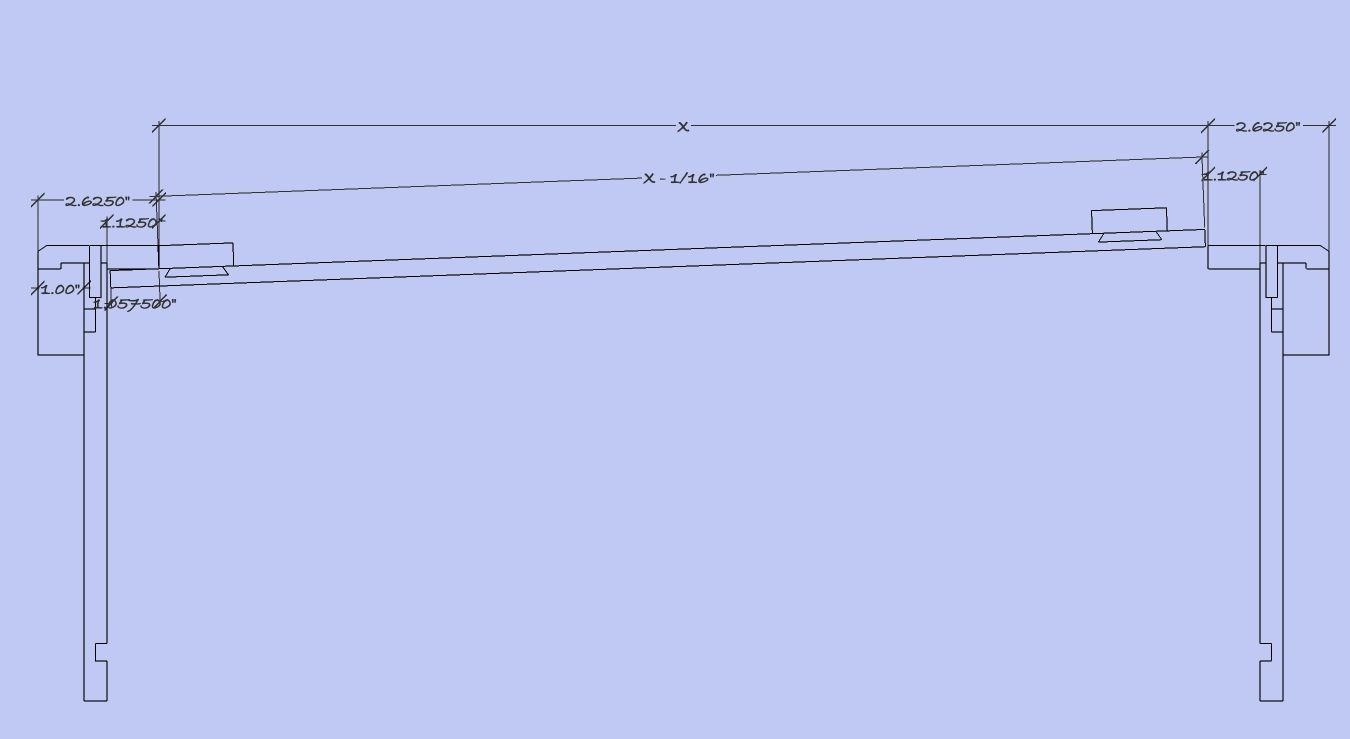 Okay, with the lid trimmed to a length so that it will drop into the opening, the lid can be lowered down until it is horizontal: 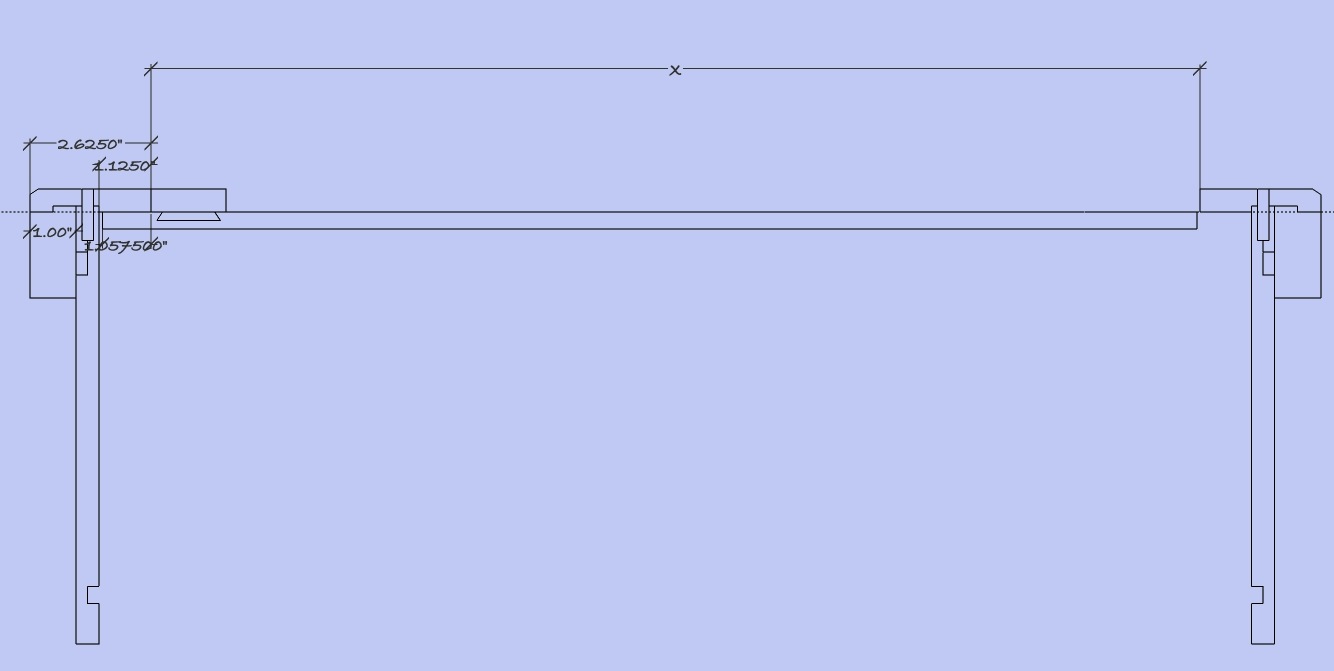 Once down, the lid is slid horizontally to engage under the cap: 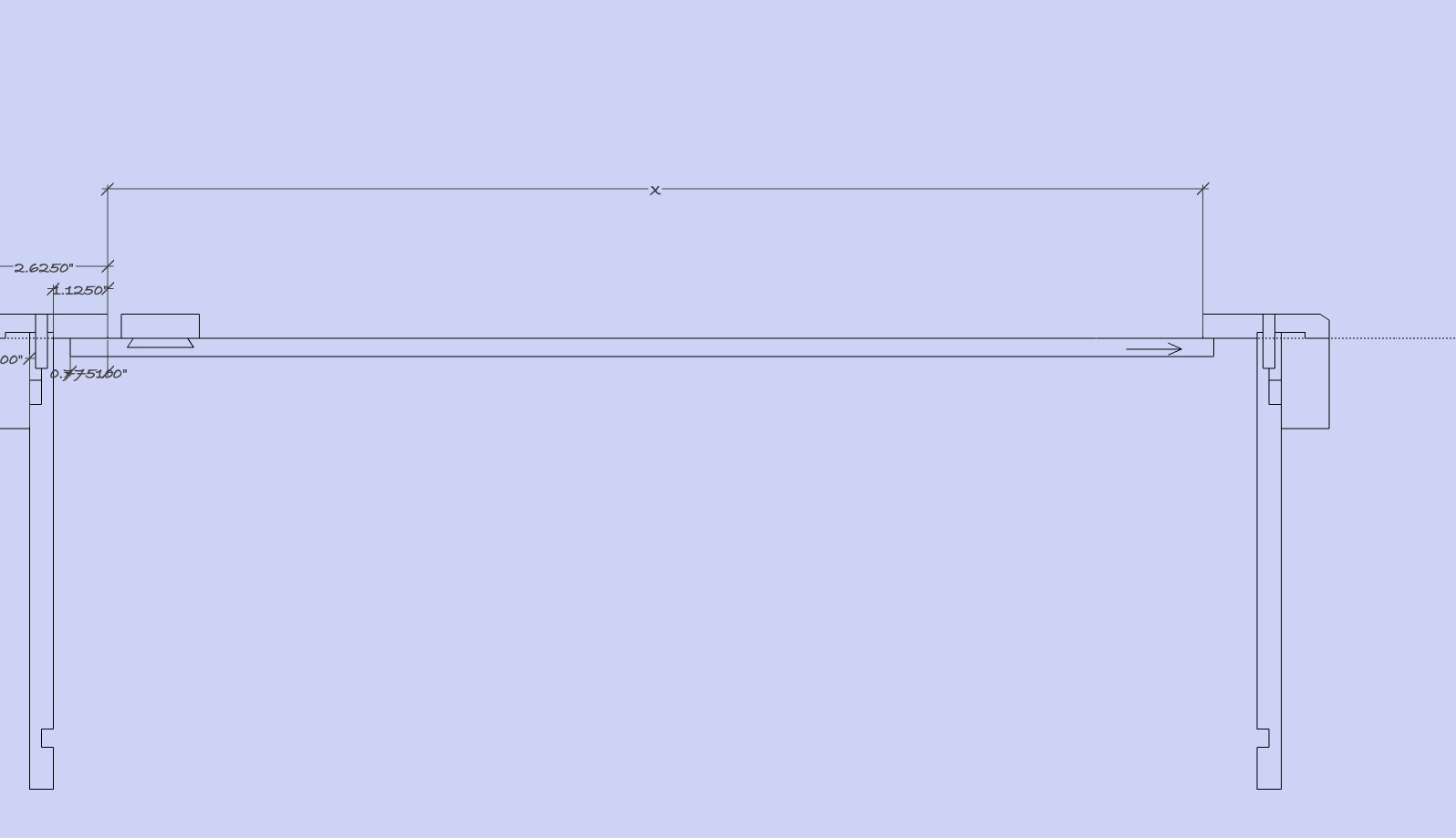 Of course, the other cap also overhangs 1.125" into the opening, so if you were to set things up so the lid could slide all the way over, the lid would no longer be held under the cap at the other end - there would be a slight gap and the lid would be able to come out, which is not what you want: 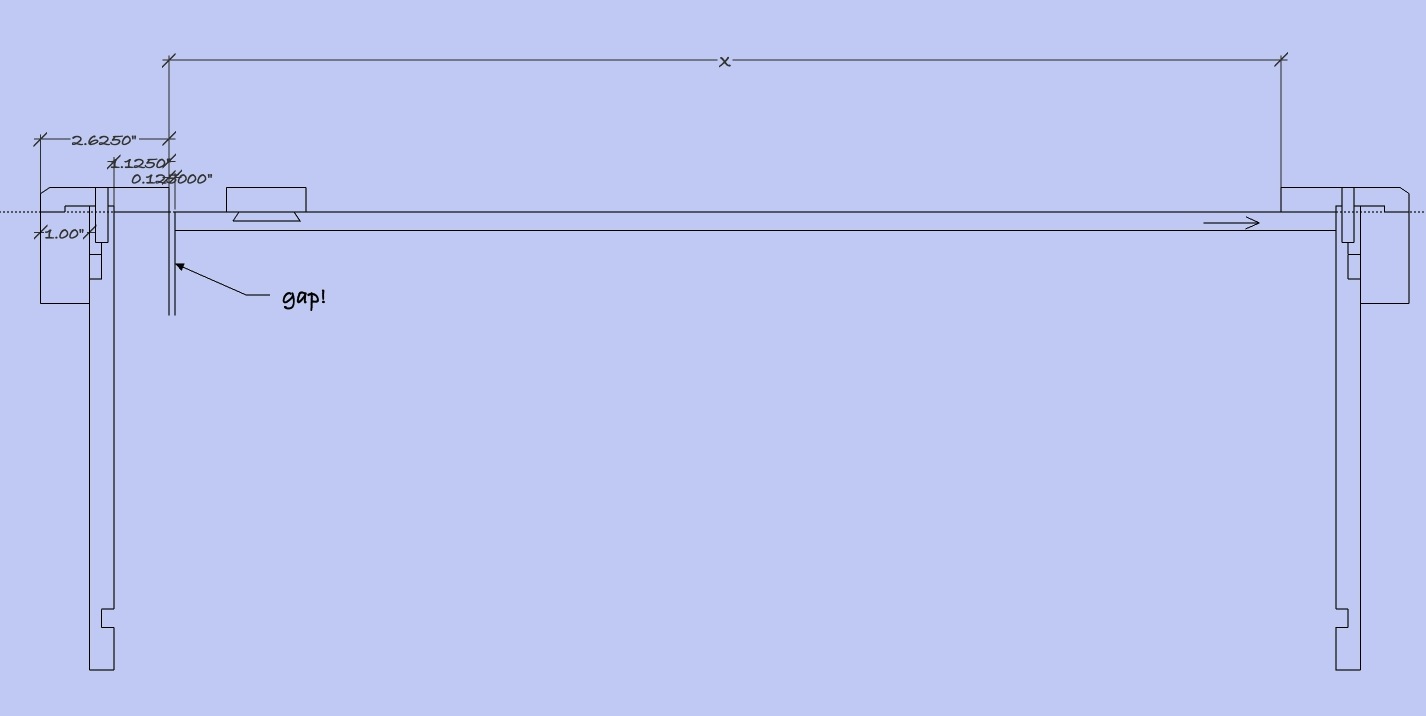 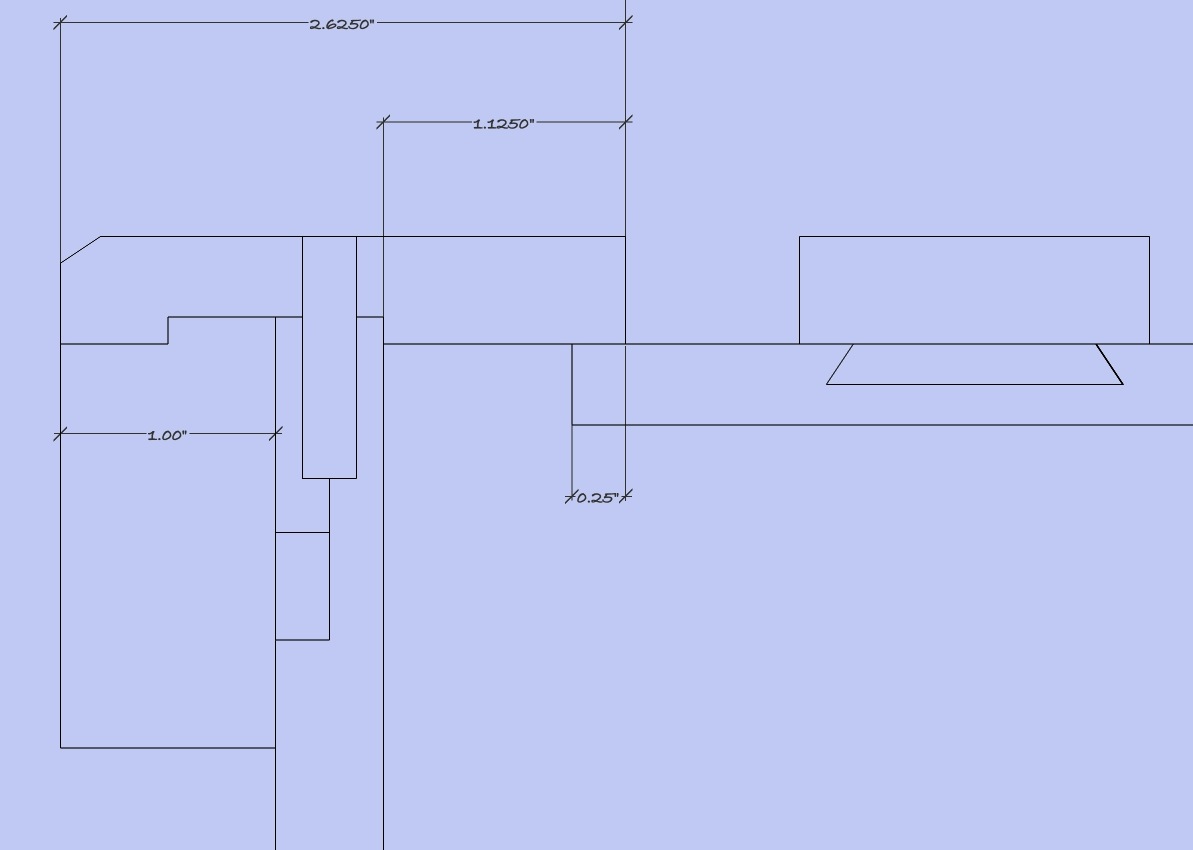 With the lid at that position, you can mark the position for the second lid batten- in this case it is in from the edge of the lid 0.75": 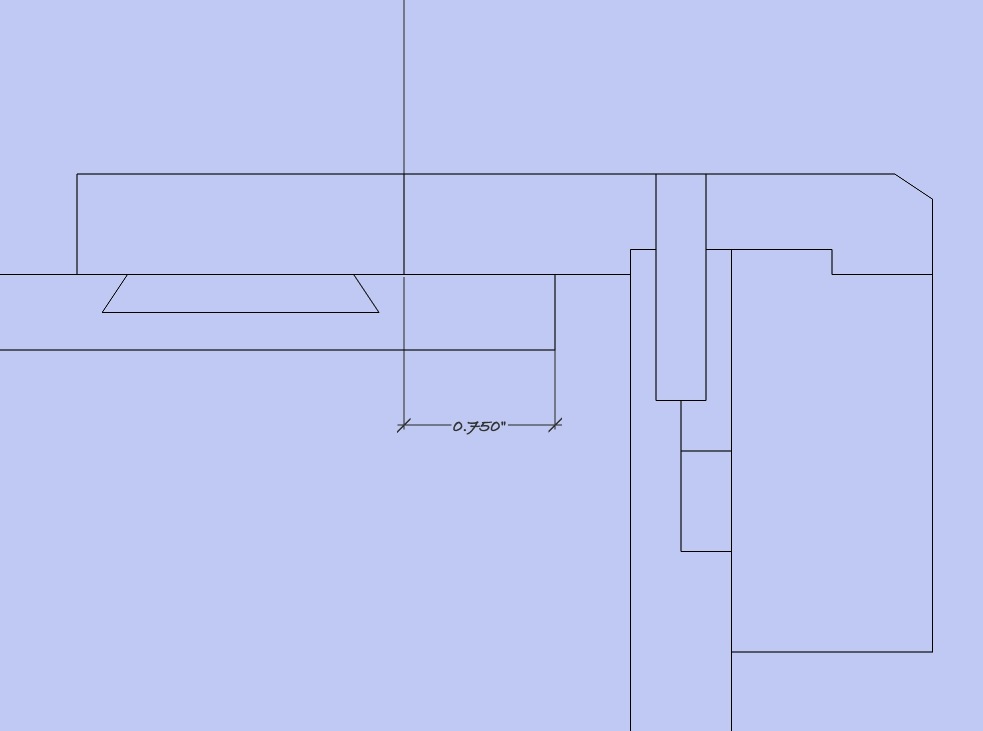 Obviously, it would be simple enough to work out a little bit of a math formula to determine the offsets of the battens based on the opening size and other factors noted, or you could draw it out and measure, or you could fit and scribe.
Top
Post Reply
14 posts

Return to “Project 1: The Tool Box”

Users browsing this forum: No registered users and 2 guests