For the discussion of matters not relevant to Study Group mailings. idle chit chat, rants and raves - whatever is on your mind or care to share about.
Post Reply
1 post • Page 1 of 1

Now a month ago, I visited the Maison of the Compagnons du Devoir (CduD for short) in Brussels.
The Compagnons du Devoir are a French organization which promotes the highest standards of craftsmanship in about 30 different disciplines. These range from automobile bodywork, through masonry to patisserie and, indeed, include both carpentry and furniture making. Here is a link to their website:
http://www.compagnons-du-devoir.com
There is a Union Jack icon/link but the English-language version let's say needs working on.

The Maison in Brussels is one of a small number outside France.
The basic method of the CduD is through apprenticeships, where the student works during the day and in the evening and Saturdays comes to the Maison (or a suitably-equipped place) for theoretical and practical work. At the end of the apprenticeship he/she becomes a "journeyman", and for two years (I think) moves from job to job, honing their skills and learning how others do things. They are encouraged to "journey" outside their own country, thus there is no Maison in the UK but there are several journeymen.

Reading this, you will probably understand that a lot of medieval (or perhaps Renaissence) ideals are incorporated into the CduD, like a Guild, and with it a certain form of protection. In fact although Brussels is less than an hour away from my home I found it very difficult to "penetrate" their Maison there !
While on a trip to London I arranged to meet the UK Journeyman coordinator and it was he who got me a successful introduction.

I met the Prévôt, the official title for the director of the Maison (Guillaume Delonca). He was himself a graduate of the CduD and was a "menuisier", as distinct from a charpentier - a distinction he was keen that I would understand. An illustration he gave which is near to CSG interests was the rectangular/trapezoidal footprint of splayed legs - an example Chris has written about in the TCW blog. He also criticized the top edge of legs not being flush or parallel to the top surface of the "table". And this influences the way drawings are made. If I understood him correctly, he maintained that the Menuisier-way was harder to draw but easier to construct.

I intend to give it some study (Mr Delonca has agreed to answer questions.). We then did a short tour and I was surprised how large the Maison was. It was almost empty of people as it was late afternoon and the students arrive, after work, in the evening. There was a small lecture theatre that had some superb cabinet work., but what caught my eye was a little model of which I attach a photo. Those who are familiar with the "X marks the spot" thread on the TCW blog will understand my excitement when I saw it.

And that's about it. My visit lasted about an hour and it had the very useful result of opening doors to people who might be able to help me - if I get stuck with CSG assignments, for example . . .
Rob 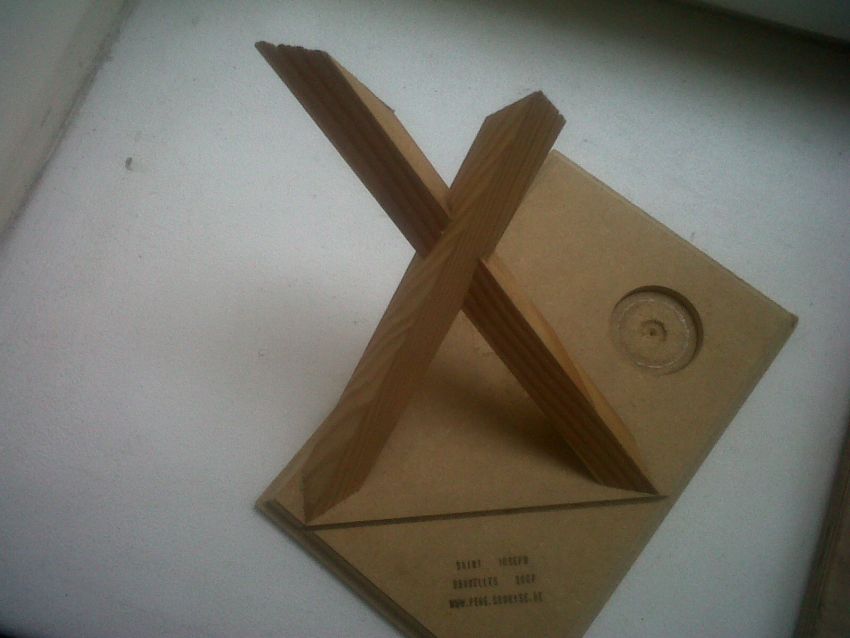 Return to “Miscellaneous Ramblings (Off Topic)”