It doesn't seem uncommon to find homes where the occupants living in them seem to have refined taste when it comes to their choice and budget allowed for interior furnishings, including very well made and attractive woodwork, but for some reason, the outdoor furniture that these same folks wish to use, can much be from the dregs of cheap and much lesser visually appealing merchandise. Even some artists that I know that do very nice work themselves, use plastic chairs outdoors, because they are "cheap and durable". One of those "Yes, but...." things. I'm not sure what is worse, a cut off piece of log to sit on, or as is shown in the photo, the stackable polypropylene chairs that have taken over much of Asia, but you can see a lot of both types in use, and even at some galleries! I wanted to provide an alternative out of Western Red cedar. I haven't had anyone use the furniture directly out in the open, but under a partial covering where it still gets sun and some rain, after a number of years, things are still holding together quite well.

Once you get away from the Adirondack chair, there doesn't seem to be a whole lot of interest amongst woodworkers to make outdoor furniture, so I thought that I I would post some old work from a time when i was interested in tackling the idea to make something attractive and outdoor functional. Western cedar is light and relatively soft, but with some consideration to the potential structural weakness, it seems to be a good choice. For those unfamiliar with the wood, it has a chemical content that makes the wood very rot resistant. Not very easily subject to splitting either. A downed tree can sit in a wet environment on the forest floor and last a century or longer.

Some of the more revered historically evolved chairs still being made, like Windsors, actually started off as initially being used outside, in Great Britain where that type pf chair originated, made from hardwoods that were painted. The comfort and reliability of the early models is what prompted people to bring them indoors for more consistent daily use, and why the designs continued to evolve to much expand those comprising that type of chair. 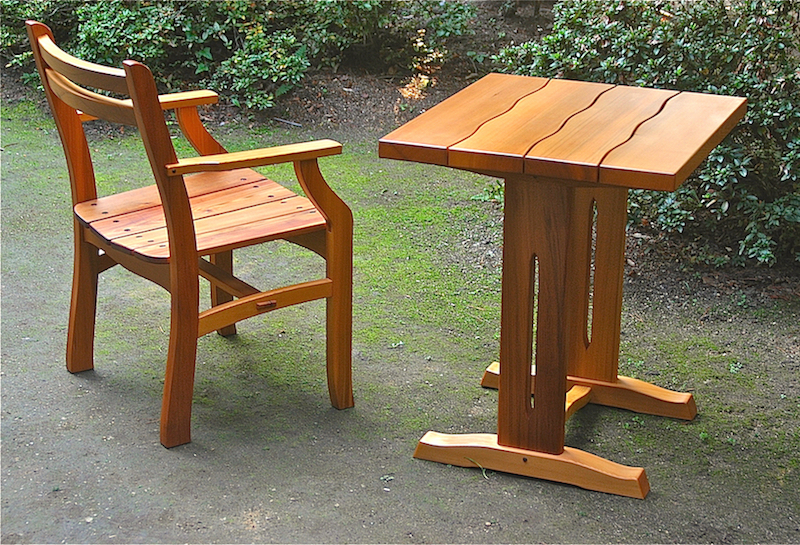 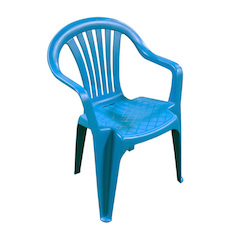 I have a hard time with it myself, I have a table I built in Padauk for outside dining, it's held up well for the couple years it's been out there.

Thanks, Brian. To be fair, and as you say, there is some very attractive metal and sometimes combined with wood, chairs and tables made for exterior use. I enjoy going to a Cassina showroom, and quite high quality is what I have observed. I have also seen some very attractive exterior seating made in Spain. It must be that the Europeans in particular have a good sense to the need for good looking exterior furnishings as well.
Top

I really like the lines on those pieces - sweet!

I think a lot of Americans are:

A) afraid that plain wood will not last outdoors
B) habituated to cheap things at low prices
C) fear the effects of weathering on wood - they want it to always look pristine.

Both of which lead to the plastic chair or the metal and canvas folding chair for outdoors being the most prevalent. Adirondack chairs would definitely be the most common wooden chair, nearly always painted.

I've got a number of pieces outdoors, including a shrine lantern (honduran mahogany), some garden structures for plants (jatoba) and a hose reel mount on the side of my house (also jatoba). It's been a mini-laboratory of sorts to witness the effects of sun, rain, freeze, thaw, and I've learned a lot over the past two years. Jatoba, for instance, will not hold onto end grain paint, while mahogany does. Both woods seem to be lasting well and weathering gracefully.

WRC will last well outdoors though for furniture I would think it would show dents and dings rather easily as it is so soft. Burmese teak and genuine mahogany seem to be ideal choices, but for the price of the materials... Then there is black locust, which is extremely rot resistant. There's no shortage of supply around here, hmm...
Top

I feel your assessment of Americans is unfortunately spot on - cheap usually seems to win.
Top

The propaganda to move people in that direction has been in full swing, especially since WWII ended. The problem to be solved at that juncture was what do do with all the surplus productive capacity in the US. The answer has been globalization and the 'consumer society'. 'Work makes free' and 'spending makes happy' are the basic messages.

The profit margin has always been the highest on the cheapest goods, and many people don't seem to realize that. The $4.99 mini-hammer at the 'impulse buy' tray near the check out of the hardware store probably cost less than $1.00 in material and labor (a 400% markup), while the $49.99 Estwing hammer on the rack was probably $20~25.00 to make (a 50% mark up).

If you sell retail, obviously it would be a better proposition in many respects to sell extremely cheap plastic-y things, looking at a dollar/square foot return metric.
Top

Yes, the WRC is soft and potentially scratches up pretty easily. I made a number of those chairs and larger tables for a gallery that uses the furniture on an outdoor veranda. They serve each visitor their coffee or tea on a small tray that gets placed in front of each person. The woodwork gets a lot of use, and though made about eight years ago, remains greatly free from scratches and such. The chairs as well. The furniture gets put away during the winter months. How to use furniture without it showing damage is an interesting subject. Rings and bracelets are a curse, and things hanging from someone's waist or sticking out of pockets are hard on chairs, and an ultimate risk to tables is someone dragging tableware across the surface rather than lifting it up, and something that can really freak you out seeing it done, after having put a lot of time and effort into making that surface beautiful.

One nice feature of the WRC is it's lightness for moving around. I do hear a lot of comment from people wanting light furniture. Though I have used a lot of Black Locust, except for the stretcher on the table in the photo, never for out of doors. A pretty heavy wood with a tendency to split fairly easy due to the very straight grain, and my impression is that the connecting cellulose in the wood tends to be lesser than in other species. Still, it is noted for holding up out of doors, as you say. I've wondered why the "Black" originated in the common name. Steaming it for bending, the water turns quite distinctively black.

What finish to use on exterior furniture is another subject worthy of study. Recently I have been adding a little urethane to Perilla oil, surprisingly the two are compatible. Not enough Urethane to seal the wood to prevent refinishing without removing the earlier application, but adding some moisture protection. Exterior work does require new applications over time. I've even doing that mix on interior finish as well, living in a high humidity environment for part of the year. I like the Perilla best on it's own, but a little of the Urethane seems a good compromise and doesn't suffer the look much.

Honduran Mahogany is such an outstanding material for woodwork. Too bad about it's scarcity now and the cost when you can find it.
Top

a few months ago I took a course in Colorado in European window making. Part of the course involved finishing, and I was impressed with what I saw. There were two systems demonstrated, one film-forming and guaranteed 5 years, and the other 'close to the wood' which required reapplication yearly. Both systems were low-VOC, water-based, and very easy to apply and repair.

I'm going with the 'close to the wood' finish, called 'waxy impregnator' on the Japanese gate project I'm engaged upon. It's a wipe on/wipe off product, three rounds and you're done and gives a nice sheen.

I'd be curious to try the perilla oil, but no one sells it over here. There's also a persimmon-based finish if I'm not mistaken, and someone in the US is selling that.
Top

Chris,
"Waxy impregnator" sounds interesting. I'd be curious in seeing the results. Are you going to be refinishing every year, or simply as an initial protection? Supposedly the best exterior type finishes sold here are out of Europe, particularly Germany. They really can dent your wallet.

Once I started using Perilla oil it pretty much settled the case for me regarding oil finishes. An outfit in Nagoya or Osaka, Ohta Oil, processes it out of seeds that they get from China, and very pure stuff. When you pour it out it looks like it should be expensive. I think just about all Perilla seed comes from China. It is available both with or without a drier content, and now they also offer it with a number of colors added. There seems to be a lot of world wide interest in Perilla oil for various uses, accounting for a relative scarcity of the product, and it's high cost. Apparently, Perilla oil is some kind of health giving product.

The Perilla is similar to Tung oil, but I find that it is more durable by degrees and very nicely penetrates and brings out the rich color of wood.. Similar drying times to Tung oil with or without a drier in it. I do like a sheen in finishing results, but it requires a number of applications or you can cut corners by a lot of polishing of one sort or another along the process. Initial applications I thin.
Top

The Waxy Impregnator is an Italian product from a company called Sirca.

I'll be refinishing every year because I negotiated a maintenance contract for the structure for the next 20 years as part of the overall scope of work.

I'm feeling kind of done with Tung Oil. Not interested in metallic driers, oil rags, etc.. Really liking the water-based urethane now and it is easy with aniline dye to obtain the same darkening you get with Tung Oil - or should I call it wiping varnish, as that is what most of the products sold as 'Tung Oil' actually are..
Top
Post Reply
10 posts • Page 1 of 1