Full length sliding dovetail with crosswise plugs on either end can be done sufficiently cleanly so that the joinery mechanism is very discrete.

That's a good idea, and if I run the plugs along the grain of the table they would practically disappear. I did contrasting plugs on my recent trestle table and was pretty happy with it, but wondered if I shouldn't have hidden the joinery.

I could do that for the stretcher as well, and have it join together with the upright with a rod tenon, that would look nice and give a hint that there is more to it for those that would like to investigate further.
Top

What roils me a bit - more than a bit -about Nakashima is their marketing, intentional or otherwise, of a mystique of Japanese craftsmanship and natural wood slabs, when the underlying truth involves screws and lot of wood putty. They used to have a picture on their website from the workshop, and the worker's bench in the background had many conspicuous cans of wood putty. They appear to buy putty by the case.

Also, the conoid chair is a poor structural design.

And then there are the casework pieces and small tables, with their plain, boring, machine-turned legs. Those have never turned my crank.

And yes, at least they use solid wood, and that puts them in a decidedly small group of makers these days. And Nakashima has inspired many, like Brian, which is surely a good thing too.

Maybe we should thank all those makers who use particle board and plywood as they have impelled some at least to move in the opposite direction in what they make.
Top

Daruma wrote:In regarding that sliding dovetail and crosswise plugs I`m still bemused a bit as to how you could do that with the stretcher and the legs as I would think they would interfere with one another. Of course the through tenon could be used on the legs but with this nice tamo ash top I used that would have left me a bit unsettled I think. Maybe an unglued joinery only piece just doesn`t jive with this design. Any thoughts?

For clarification, I was talking about the sliding dovetail with plugs idea in a more general way, not specifically in reference to the table you made. It would work best with legs near the same width as the top, or by way of battens attached to the top of the legs, and suit a top with square edges rather than waney. The design and joinery choices are interrelated, and one can inform the other in most cases. Your choice to use a waney edge board for the top means certain joints makes sense while other joints do not.
Top

That table looks nice, I like the effect of bringing the uprights in so far. I think leaving the stretcher to float can be problematic, but I'm actually experimenting with it as well. I put together a quick minguren table yesterday for my nightstand (I need a pair in relatively short order). I dovetailed the base into the top then fitted the upright support with a bridle joint that terminates into the top with a pair of mortises.

I am still debating how to ultimately handle the stretcher, and playing with proportions, so I decided to assemble it and leave it be for a few weeks. It's rock solid, I sat on it to see if I could cause a wiggle in the joinery.

I have some ideas on how to employ a rod tenon for the stretcher, combined with a mechanism to join the stretcher to the top which functions along with the other joinery. My first thought is a half dovetail on two sides of a tenon, that could be wedged in with one single, long wedge.

For my wife's side of the bed I plan to do a frenchman's cove table, she needs a lot of surface area for her many, many items. The frenchman's cove base is conducive to that and I will make a simple top for it that will work with sliding dovetail supports.

For better or for worse, I like these tables, once real joinery is employed I like them a bit more.
Top

Daruma, thanks for sharing your work and learning experiences.

I'm unfamiliar with the term Minguren, does it relate to this particular style of furniture, such as the tables you've posted?

Brian I hope you post pictures of the side tables you're building. I'm having a hard time picturing the rod tenon stretcher but look forward to seeing how you work out that challenge.

The discussion about joinery and craftsmanship is one that I find really interesting. I started out in the woodworking field by way of building/repairing guitars. Glue is heavily used in lutherie, however those with the mindset of repairability and longevity tend to use hide glue for the parts that most often require repair. Moving into other areas of woodworking the use of glue and screws as methods of construction were all I was aware of until being introduced to more traditional forms of woodworking, Japanese woodworking in particular.

I currently work in a community shop with 14 other people and I am the odd ball of the bunch attempting to make most of my furniture work using joinery alone... at least that's the direction I'm moving towards and striving for. The other guys in the shop rely heavily on glues, screws, and the festool domino. It's difficult at times to be working at a much slower route pace that traditional joinery work requires when everyone around me is cranking out projects left and right using more conventional methods. But the more I learn from craftsmen on this forum and from people like Chris and other woodworkers who build structures with joinery alone, the more I want to do the same with my work for the sake of keeping joinery skills and knowledge relevant and for longevity and repairability.
Top

Minguren refers to a series of George Nakashima designs. The particulars escape me at the moment, but I believe it was for a show in Japan, or something to that effect.

I feel there is certainly a misconception that building with joinery or building without glue/screws is overbuilding or exceptionally time consuming. It is time consuming for me, but when I compare to previous projects that were built with modern methods I can say that building with less reliance upon glue/screws and modern method had made a more enjoyable experience in which I feel that I am progressing as a craftsman. As I improve my own ability, comparable pieces are made somewhat quickly and in some instances much faster than other methods. For instance, I plane to a finish and do so much faster than the time consumed working through a series of sandpaper grits with an ROS. It has an added benefit of not ruining the flatness of the part or the crispness of edges. Also, it's impossible to leave swirls with a plane. I'm not breathing in silicone carbide and fine dust and not wearing a mask all day.

Back to joinery; It has certain advantage which is not immediately realized, primarily that it does not self destruct over time and can be taken apart for repair. Building a serviceable piece has advantages over building a piece which will need major replacement parts or has limited lifespan. The primary advantage being that other people can use it and repair it long after you are gone or unable to do so.

This has limited appeal in modern society, but the appeal is gaining considerable momentum. I think a certain undercurrent exists of people who are not interested in consumable culture and want the reassurance of time tested method.

I always get comments about the patience that must be needed to make a piece, but Most everyone who I engage with shows a level of appreciation for the craft once they start to understand why would take such seemingly lengthy process.

Everything's relative, and to me something that only takes a few days or weeks to build is not all that time consuming. There are others unwilling to dedicate more than an afternoon and still others which spend years in a single project.
Top

I completely agree that certain tasks done with hand tools produce a better result in quicker fashion such as hand planing. My sander has sat on my shelf for a few years now and I haven't missed using it. Other tasks such as cutting/fitting joints can be time consuming but you make a good point about getting faster with experience.

I also completely agree about the satisfaction and rewarding challenges of working with hand tools and joining wood structures. Every project seems to be a reminder that there is a never ending horizon when it comes to achieving good results, you can strive for perfection but there always seems to be room for improvement in design and execution. The same can be said for working only with power tools I suppose, however I think proficiency with hand tools takes much more time to master (I certainly have a ways to go). Sanding actually does take skill and good technique, but it seems to me that once you've got the technique down you're pretty well set, whereas when working with a hand plane each piece of wood cuts differently, and at least for me I learn something new and find ways to get better results all the time.
Top

Here's a cleanly done version of the batten with multiple sliding concealed dovetail, connecting to a waney-edge table top slab - it looks like it is a glued dovetail piece with cross-doweling, though it may be machined from one piece as well - hard to tell: 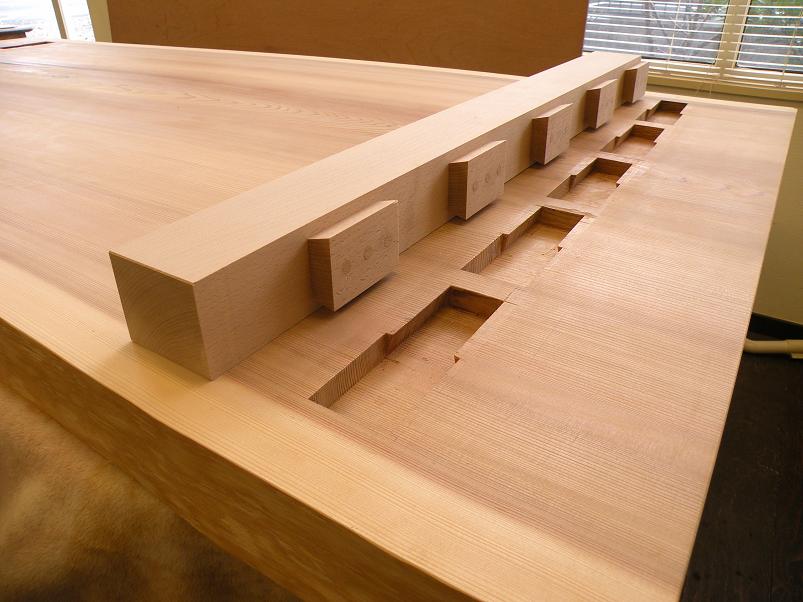 It seems like too many dovetail keys to me. Maybe three would be better.

I would use floating keys, and go one step further and employ floating double hammer head keys, if the top was thick enough.
Top

Excellent work Daruma. You're privileged to be learning from a master woodworker. For the rest of us, there's always trial and error. Who knows, I may just turn up on Chris' doorstep one day

I don't think I could have said it any better Jon. I haven't touched my sander since I've learnt how to sharpen a plane blade.
Top 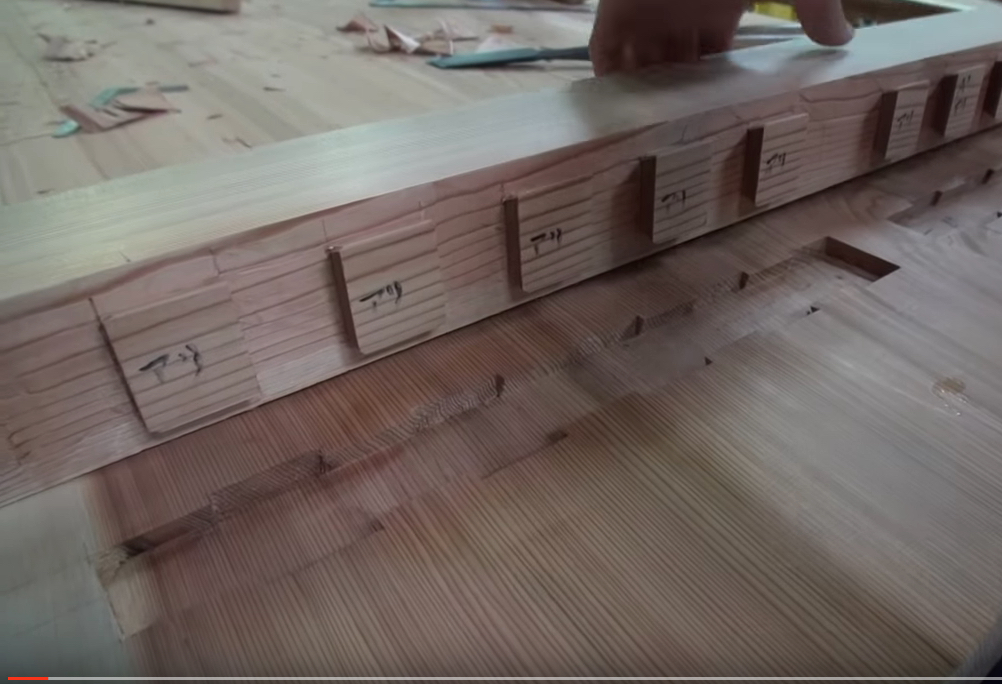 I believe the line of dovetails is tapered slightly as well. An elegant solution in some respects, however the dovetail males themselves are, I have found, vulnerable to snapping off if the joint fit is too tight - -though in a softwood it will probably be just fine.
Top
Post Reply
28 posts