All right, time to uncork the bottle

All right, time to uncork the bottle

I've been using this finish on the bubinga coffee and side table I've been building over the past few months: 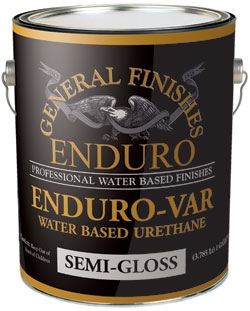 They also have it in a gloss and satin formulation. I went the middle route, though I'm now thinking it might have made more sense to go satin finish on tables. Table tops at least, as these inevitably see wear and tear and scratches, so there isn't much point in putting a high gloss finish on.

It's a very easy to use product. Shake can, and open. Dip brush in can and apply, taking care to brush fairly evenly. Broader horizontal surfaces can tolerate a thicker build up. It dries primarily by oxidation with the air. No VOC's, no toxicity really. If the space is reasonably warm, it will be dry enough to work again in 1~2 hours. If the space is cold, it will be workable in 3~4 hours. It can also be sprayed if you have that kind of equipment.

Being water-based, the first coat will possibly raise the grain. If you planed the wood it will not raise the grain much at all, but if you sanded, and especially if the wood is curly, you will likely have areas of raised grain. it's no big deal.

All you do is deck the dried finish down with a sanding block and #320 paper. You are looking to scuff the surface and remove any dust nibs or rough bits of raised grain. Don't overwork the surface as you will be removing finish unnecessarily. When done, wipe with a tack cloth or blow off with compressed air and then apply another coat. And then repeat to build up, at least 3 coats. I put 4 coats on most parts, and 5 coats on table tops which see a bit more wear.

Enduro Var is slightly amber, unlike many other water-based urethanes, which are pretty much clear. If you want to darken a wood a little bit, it is quite easy. You need to obtain some aniline dye. I found some at my local Woodcraft store, a product by TransTint (see: http://homesteadfinishingproducts.com/t ... quid-dyes/). It wasn't cheap (around $21), but a little goes a very long way. I added 6 drops of #6001 honey amber dye to a quart of Enduro Var and it made a noticeable difference in the bubinga. The nice thing is how tunable it all is. I put a coat of the finish on with the honey amber dye and then realized that it was as dark as I needed it to get, and then simply finished on top of that for the next three coats with un-tinted semi gloss. If I wanted it darker, I could have either added more drops of TransTint, or more coats of tinted finish. It's that easy.

Once you have the number of coats on you desire, you deck the surface down with a sanding block and #320~#400 paper. This finish does not clog sandpaper. Then let it cure a bit more, for 3~4 days at least.

To polish, you could use pumice and rottenstone, however I elected to try Micromesh: 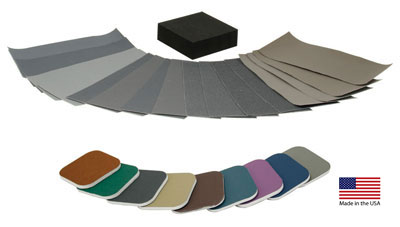 This kind of abrasive was developed to polish aircraft windscreens. It does an incredible job on wood. Probably it does a finer job than required for most pieces of furniture, but you can decide for yourself where to stop in the continuum.

To use Micromesh, you can use it dry, or you can use a cutting lubricant such as water or paraffin oil. I chose this: 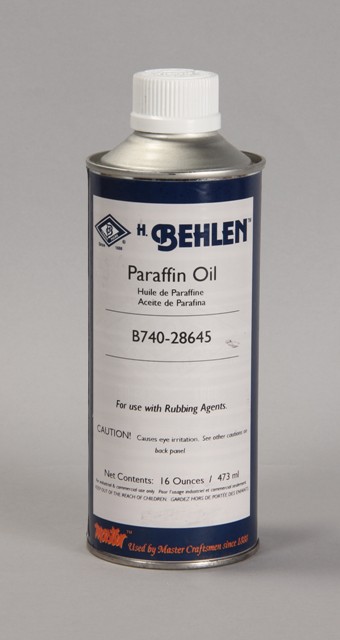 You could also use some sort of light vegetable oil I'm sure.

You work you way through the Micromesh grits to the point you wish to go. At #6000 and above the scratches left behind are invisible to the human eye.

When finished with the Micromesh, wipe the piece down with methylated spirits to clean the oil off. Then all you have to do is wax the piece. I've tried various specialty furniture waxes, however in recent years I've settled on Kiwi shoe polish, neutral: 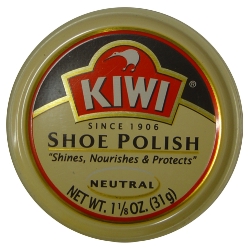 It buffs out without streaks and is relatively inexpensive. It does have some volatile solvents in it though, so use in well-ventilated conditions.

After that, if you like, you can reduce the gloss and even out any unevenness in the wax by rubbing with #0000 steel wool or equivalent 3M abrasive fiber pad.

-it dries really hard
-it dries fast
-there are no toxic solvents or other VOC's
-doesn't darken the wood unless you want to by adding aniline dye.
-unlike oil finishes, there are not worries about rags catching on fire
-clean up of brushes just requires soap and water.

I can get six coats on in three days, wait three more days and polish it out. In one week you are done. It looks great! Seriously, there are no drawbacks to this product as far as I can tell. Give it a try.
Top

Mohawk put out a polishing compound that is excellent for rubbing out a finish and bringing it to a high luster, including a natural oil finish. It was available in both a wax and wax free type. I prefer the wax free. I can't find it on the web, but I hope it is still available. My old can is almost out and it is from way back. It never seems to go hard in the can. Great stuff, some type of light abrasive compound in a thick carrier agent the consistency of a heavy wax. I suppose it would be an abrasive grit on the order of rottenstone, and easy to use with rub out and wipe off. I'll get a product number off the can and see if it might still be listed. Tragic if it isn't.
Top

I've heard that Mohawk products are good too, but I haven't seen them around the places where I buy finish materials.
Top

Chris
I wonder why you found the Polywhey
unacceptable as a finish. Its obvious that
you are not prejudiced against water-based
finishes. Enquiring minds ...

"Chris
I wonder why you found the Polywhey
unacceptable as a finish. Its obvious that
you are not prejudiced against water-based
finishes. Enquiring minds ..."

That's a good question. It's not that I found it unacceptable as a finish, it was more that I concluded it made better sense as a finish for light colored woods. It was easy to use and apply, and no VOCs to speak of. Local too.

Maybe I should give it another shake some day? I am not sure it contains a resin as hard as urethane, however if the job at hand is not a table top, that factor wouldn't be quite so important.
Top

Thanks for that. I thought it was pretty good stuff.

By the way, the forum is brilliant.
Top

Does General Finishes make something similar to Enduro-Var without the amber coloration, for light-colored woods?

Also, have you tried applying Enduro-Var with rags instead of a brush? Or is it strictly a brush finish?
Top

"Does General Finishes make something similar to Enduro-Var without the amber coloration, for light-colored woods?"

Oh yeah. The Enduro Var is in fact unusual among water-based urethanes in that it has the amber tone. The other water-based products they have are dead clear and would be a better choice for lighter toned woods:

this is the same as the High Performance but without the UV stabilizers:

They also have a water based lacquer:

The High Performance was voted best overall choice in a Fine Woodworking review of water based finishes, issue #115.

All that said, I have no experience working with it. I would choose it though for a light toned wood, based on my experience with the Enduro Var.

I am not sure about using a rag to apply Enduro Var - I think rags in general are more suitably used on finishes which do not form a film, but could be wrong about that. You could contact General finishes though and check with them. Their page talking about application methods does not mention use of a rag, but do mention a latex paint pad applicator as one option:

I've recently learned that General Wood Turner's Finish contains the same resins as Enduro-Var, but in a diluted formula for wiping: http://cooltoolshed.com/wp-content/uplo ... Finish.pdf

I may experiment this to see if it is a good water-based wiping varnish, which seem to be fairly uncommon. It will take more coats than Enduro-Var for the same outcome, but the coats should be easier to apply.
Top

Return to “Finishing - Materials and Techniques”