joinery for the carcass of a desk valet or small cabinet

joinery for the carcass of a desk valet or small cabinet

I have been trying to figure out the best set of joinery for this basic, solid wood carcass. It seems like some cross-grain joinery is required due to the design... I would be interested in how others would solve this puzzle, i.e., what joinery would be used for what boards, what pieces would be solidly locked together, what pieces would need to "float", etc.

In a certain sense, I would like to have the grain wrap around side A, back C, and side a to allow the object to look good from the non-face side and I was originally thinking that secret mitered dovetails would be used at A-C and C-a. However, that creates a series of implications for the rest of joinery, maybe creating more cross grain than other approaches.

So any advice? I really interested in what and why people would suggest any particular joinery. 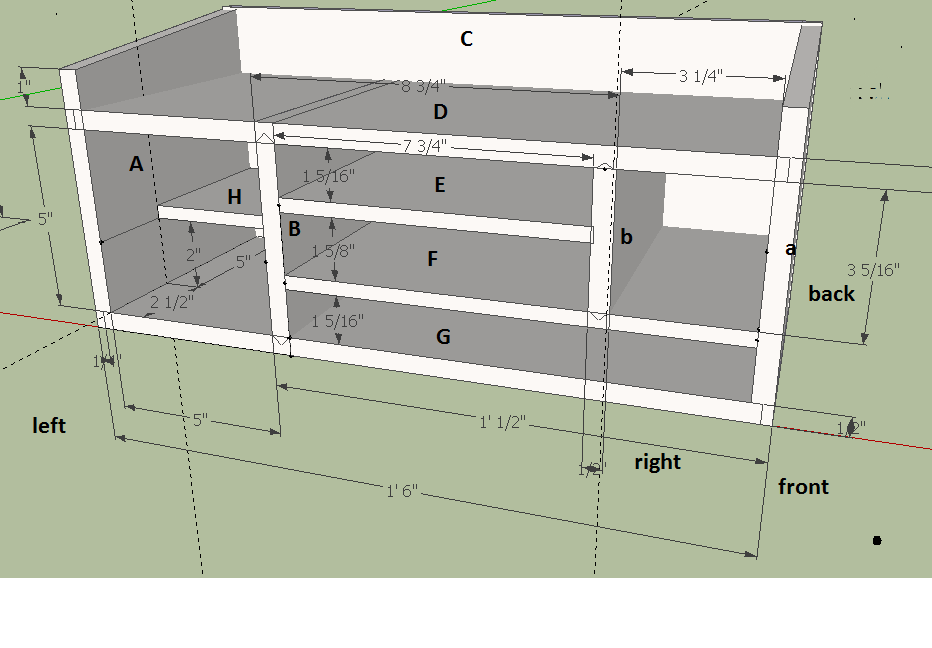 How much of the joinery do you want to be visible? Wedged tenons could be used through out and all of the pieces could be assembled before the wedges were put in place. Some of the joinery used in the toolbox project might be applicable. I know there is numerous workable solutions, just thinking out loud.
Top

If you make A-C-a out of one board, for grain continuity, then you do create cross-grain construction for the rest of the piece, which makes connecting the shelf boards D-E-F more problematic. Having A-C-a be one board means the movement in service will be vertical, up and down.

You might be able to get away with it if the board for A-C-a was quartersawn, but still, on principle, it isn't the best arrangement. It would be better to have A-G-a be one board, however I realize this loses the visual effect you are after with A-C-a.

Another possibility would be to take the stock you intend to use for A-C-a and cut it into shorter boards which are arranged vertically, glued edge to edge. I imagine board 'A' and 'a' would be single boards each, and the back piece, C, would be from two or three pieces glued on edge to one another. This means a secret mitered dovetail on the corners is out, as it is not a strong connection in this grain orientation, however a glued mitered spline joint would be decently strong. You would then want to look at some bread board end treatment perhaps.
Top

If there are some old examples (museum, forums, etc) for you to look at - not just for the successful joints but for joints that have obviously failed. Old portable writing desks and secretaries with all the cubbies also have similar configurations.
Top

I would be tempted to orient A, G, a and D in the same direction.

If it fits the aesthetic one could potentially fit C into a rabbeted groove and leave the bottom back edge free floating. I'd find a way to connect the top of the panel such as a wedged through tenon at the top half of the panel
Top

Thanks everyone, I appreciate the feedback and the confirmation that there is some inherent challenges in the design. This will be built out of quartersawn white oak, but I still think I want to eliminate the cross grain problems as much as possible.

It does seem like "C" is the troubling board. Everything else is normal carcass construction that can be done with wedged through tenons (plus a half-blind dovetail for the bottom board).

Thanks for the idea of looking at museum pieces... It seems like another design that I've seen for this kind of construction is to have boards A and a extend past the back of board C.

The third alternative is to go with the "wrap around grain" approach, with A, a, and C all in the same direction, and then try to "float" the inner cabinet with those pieces. (I still haven't figured this out, but it seems like it would involve through tenons only on the front of D to hold in place, and allow expansion towards and away from C. Then having everything else constructed almost like a box within a box, hanging off of D... ugh.

And lastly, there is the option of turning the grain of C to run up and down, similar to sides A and a, as Chris mentioned. It seems like the only joinery methods for this are the glued miter (with or without spine)... or again extending sides A and a past the back of C and gluing it within a dado.

Hmm... Am I missing other contruction options for building it with the grain of C running up and down? Seems like it would always be a glue joint (?)
Top

Please show pictures during and after. It's always interesting to watch a project.
Top

jamie shard wrote:Hmm... Am I missing other construction options for building it with the grain of C running up and down? Seems like it would always be a glue joint (?)


If the grain in board C ran up and down, then that piece would either have to come from a very large tree, and would have a significant portion of tangential grain, making it more prone to movement, or it would be a glued-up panel.

You could divide it in half with a frame element, making two smaller panels, however then you are mixing in a solid wood carcase with frame and panel. It can certainly be done, however the aesthetics would be different.

Summarizing the likely best approach: the shelf grain should all run the same way, left to right. That largely dictates how the rest of the parts need to be oriented. The bottom panel G should have grain also running left to right. The sides A and a, along with dividers B and b should have their grain running vertically, which is as if you took one of the shelf boards and folded it 90˚. The sides will therefore expand and contract with the shelves. That leaves only C as the problem to solve. The best answer is for C to have its grain running left to right, however that means the shelves cannot directly attach to the back panel. A tidier solution, perhaps, is to not make C a thick panel like the rest, but make it a thin floating panel, fitted in between the other elements, let in about 3/8" from the back edge. It would sit in a dado in the other panels and shelves.
Top
Post Reply
8 posts • Page 1 of 1