the shrinkulator! ha what a concept. I do have a moisture meter,a delmhorst, a remnant of my previous years as a water damage restoration technician quite an accurate machine head and shoulders above most timber meters you see these days. thank you all for your insights
Rob S
Top

is it possible to look at a pre milled board and know which way it was growing?

The old carpenter (70yearsold) I meet everyday at work taught me It is possible.
The hint he gave me is to read the knots...
If you have board with no knots, I can t help you

The old man might know more, but not very talkative...

Hope someone can confirm this.

That's an interesting issue - the tilt of the knots and the growth ring pattern in knots. It's not so straightforward actually.

Some trees, like the Port Orford cedar, have branches leaving the trunk at an upward angle when the tree is in the juvenile stage, however as the tree matures the branch formation becomes pendulous - the branches angle downward. So, depending upon where the knot is in the trunk the answer as to which way was up is going to vary. And when you find areas in between upward and downward knots is it hard to draw conclusions.

Then there is the difference between deciduous and coniferous trees and how they apportion tissue around bowed areas, as this picture from a Japanese book of mine shows: 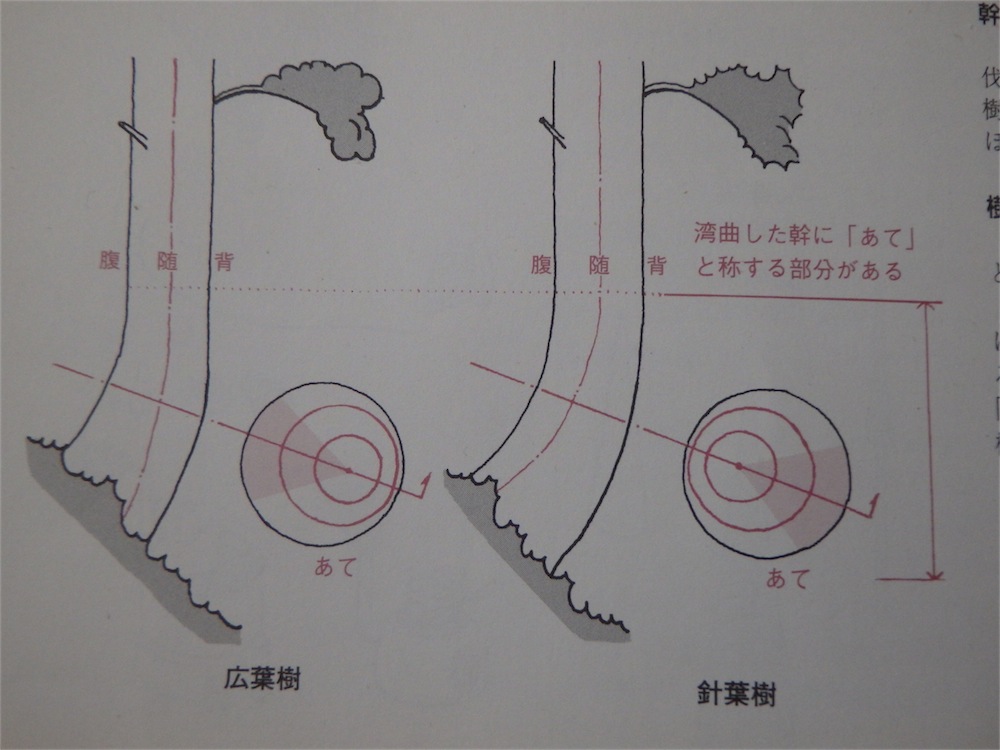 Deciduous tree on the left, conifer on the right. The location of the pith is reversed in each. The same effect is seen with branches which come out of the trunk laterally I believe. I asked a tree scientist at University of Massachusetts - Bruce Hoadley - about this and why it was reversed between the two tree types and he said science did not have a conclusive answer for that yet. Text elsewhere in the book indicates that coniferous trees have a higher amount of lignin. It appears to me that cellular structural factors account for the difference; it seems that conifers apportion more tissue to the portion of the trunk under compression, while broad leaf trees place more of it in the portion under tension.
Top

It seems logical that under any given stress, in this case gravity, the tree reacts in an opposing manner to counteract the force. it is a simple mechanism of adaptation to its environment. as such, it would seem a particular growth pattern should be largely, a representation of the forces it was subjected to during its life. extraneous factors such as weather, wind, man,undoubtedly play a role in muddling the picture the growth rings paint.
while planing away years of a trees life ive often wondered what was going on at the time the ring was formed to cause the variations in figure/ color, mineral streaks ext.
As far as why conifers focus growth effort on the areas under compression may be attributable to the nature of th softwood fiber itself. the lower the density of the fibers the more room for grain compression, you could expect the tree to focus regenerative energy in the areas sustaining the most damage. so why would more tissue be formed on the areas of tension in deciduous trees? I could only guess the arrangement of fibers is more subject to damage under tension, perhaps due to the same underlying influence: gravity. the trees composition isn't designed to withstand tension effectively so it amps up healing effort in those areas and due to its density and natural arrangement it isn't as readily damaged by increases in compressive force.

all innocent conjecture, I am no arborist. I mainly want to know which parts won't fight me when I cut them, and wont spoil my work with its inherent proclivity to movement.

by the way In my original post I was embarrassingly mistaken in my reference to the Ming table I was thinking of the toaster oven stand with the breadboard that locked the uprights in place. the design was very interesting. how has that held up thus far.

Toaster oven stand? Holding up fine however the toaster oven crapped out shortly afterwards and we bought a different model...which is too large for the stand. So it's just a little side table now. It was fun to do the quintuple through-tenons on that piece.
Top

I meant no offense in my sub par labeling ( toaster oven stand), quite the opposite infact. if I pulled off an arrangement that clean I'd put it in a glass box on display for all to see none to touch. you put a toaster/ rice cooker on it. it was the first project on your blog I had ever seen. after following the build seeing the detail that went into it: what you used it for caused me to laugh out loud at my monitor. different places in lifes joinery journey
Top

I wasn't taking any offense at all at any labeling - 'toaster oven stand' didn't strike me at all as an unusual term in fact. Not sure why that came across, but rest assured in that regard. The piece is a toaster oven stand and no more than that - a use for a few off cuts, and a chance to play with Ipé for joinery. It taught me a useful lesson about making a piece of woodwork to house a consumer product which will likely crap out in a few years, or be discontinued, and the thing that replaces it will likely not match dimensionally. Probably not the best use of wood, but i had fun at least.
Top

Thinking about breadboard ends, a mitered breadboard end, assuming it were made tightly, would really only allow expansion, not contraction. Seems to me that contraction would cause the mitered corners of the top to fan outward, leaving a wedge-shaped gap, as well as exposing a sharp little edge. That is, if it didn't cause either cracks in the top (along where the rails of a frame and panel would have been) or do something funky to the end. And expansion would add diagonal gaps as well as the usual discrepancy between top width and end length.

Personally, I like a closed breadboard end, where the tenons/toungue structure is completely housed, rather than the tounge showing at all in the profile. Of course this means that the tenons/toungue falls short of the sides, as it must have some room in the mortise, and there must be a little meat on the ends of the endpiece. So this solution cannot have the mechanical advantage of a traditional breadboard end, as the tenons/toungue structure is going to fall short of the sides of the board by, say, a half inch or more. Obviously from the viewpoint of mechanical restriction, it's right at those corners where you very much want to be clamping. But I agree that a breadboard end is mostly about capping end grain, much more than it is about mechanical restriction. And a closed breadboard end will not open vertically at the corners where it meets the top, as tradtional ends can, nor is that unclamped half inch or so likely to pop up or dive down unless the top is terribly thin.

Of course aesthetically, a closed breadboard end looks like two boards simply stuck on the ends. So, either that has to be okay for the style, or you have to make it work somehow, by exaggerating the effect for example.
Top

I had a chance to use a breadboard end on a project recently, a jewelers bench made of re-claimed Douglas fir. The truth is I have been itching to try this joint for a while now. The total width was around 22 inches. The wood was bone dry - the nice thing about reclaimed wood, air dried slowly over time.

The tenons are not wedged - the gut feeling was with this reclaimed material there might be splitting, so the tenons were just glued. The rest of the joint is not glued, hopefully this will allow for movement.

The nature of this bench is a little rough, so I did not consider a mitered end. I did consider stopping the grove short of the end, but just ran it full length. A little stronger that way.

Time will tell how she holds up. It was fun anyway! 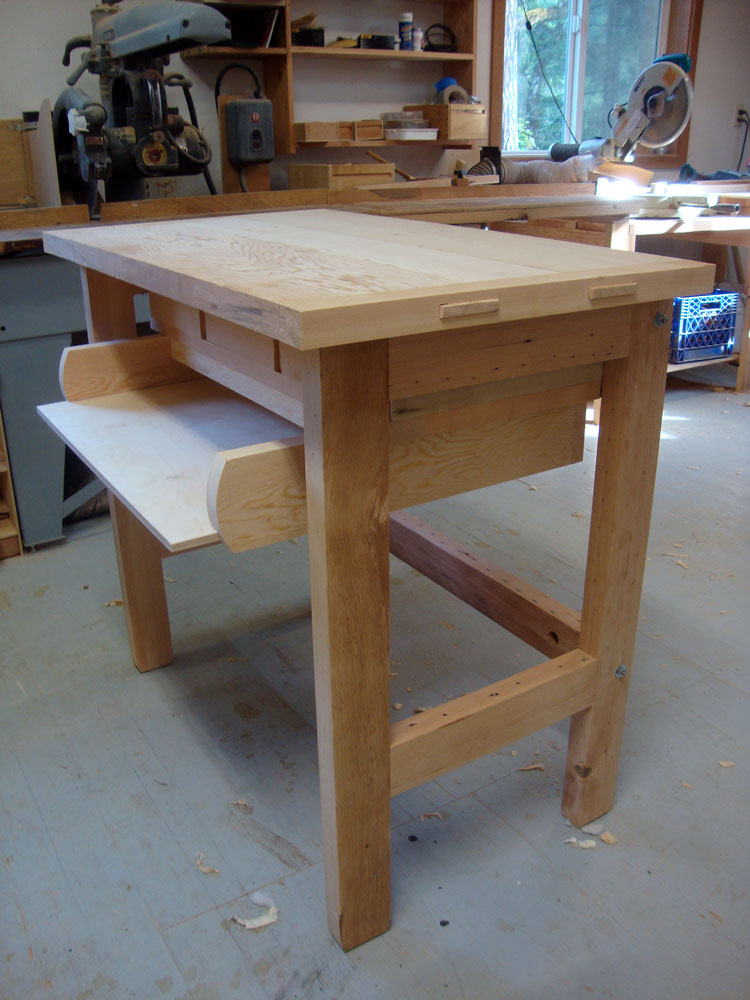 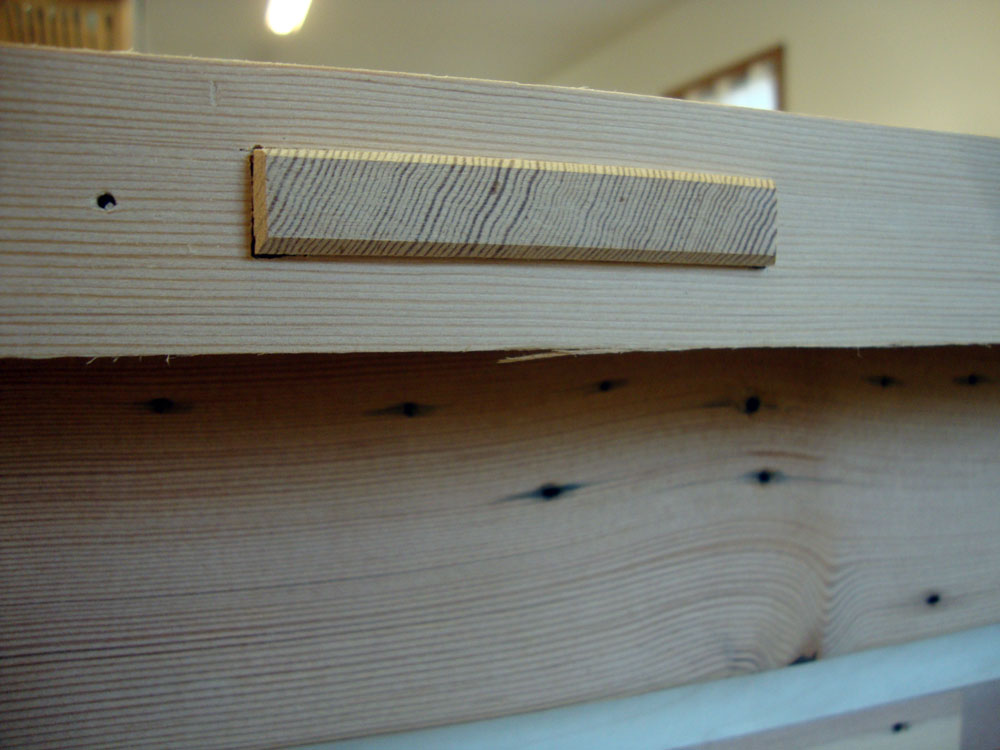 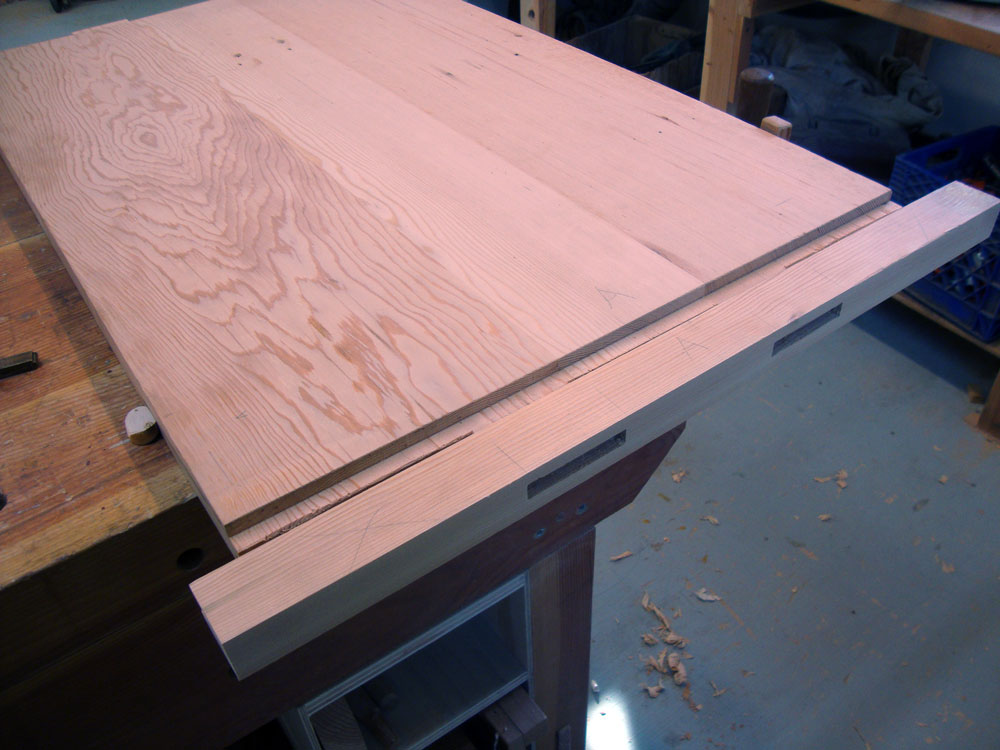 I have always thought that Douglas Fir is an under rated material. The stock in your bench is wonderful to look at and the end grain is awesome (I know looking at end grain is supposed to summon the Devil, but I like it). It has such an "inviting" presence - it makes you want to touch it. Great stuff.
Top
Post Reply
20 posts