Here's a place for forum members to share pictures of their recent work outside of the study group projects.
Post Reply
33 posts

Clean work as always Brian, though I am unclear as to why you made the battens bare-faced, instead of housed.
Top

Thanks Chris, I first made this unhoused variety of sliding dovetail in Feb for the Medicine cabinet built, having been somewhat dissatisfied with the engagement of my previous sliding dovetails I decided to see if engagement between the floor and walls of the sliding dovetail would provide firmer engagement. I was happy with how well they engaged and so, for doors at least, I've stuck with them.

I've been investigating my housed sliding dovetails and really feel that they should be cut at a higher angle to engage better. I've been contemplating making my female SD plane into a 14 degree dovetail.

What are your thoughts on this and opinion/experience with the unhoused sliding dovetails?
Top

I don't do unhoused battens, because, it seems to me, they remove the main advantages offered by the housed type. I don't see that type of batten in Chinese ming furniture, and they use a lot of battens on panels, so if unhoused dovetail battens had been found effective, as they are less work to make one would think they would have come to predominate. Instead they are not to been seen, at least with any pieces of furniture I've looked at..

The first advantage, as I see it, of housing the batten dovetail is that any imperfection of fit between the male and female dovetail slopes is concealed. Obviously, one strives for perfect cut out but shit happens from time to time. A cosmetically-marred fit can still be a good mechanical fit as a consolation prize.

Secondly, any seasonal shrinkage of the batten is concealed by the housing.

Those above two are the less important reasons though. The main advantage of housing the dovetail is that the bottom of the male dovetail can be given clearance from the floor of the female dovetail groove. I usually keep the clearance to around 0.01" or so, though it could easily be double that, or more in large constructions. This clearance allows for easier assembly, as there is far less friction, and the dovetail is allowed to do its job, the batten's dovetail slope ramping against the engrain portions in the female dovetail groove, which allows the shoulders of the batten to be drawn tight to the surface of the receiving board.

If unhoused, then the slope of the dovetail drives the bottom surface of the batten against the floor of the mortise, which makes fitting more trouble than necessary I would suspect due to the added friction.

I agree with you in regards to the angle of sliding dovetails, that steeper is better. I am using either a 23˚ or 35˚ (that is total angle, i.e., 17.5˚ each side) angle these days. The 35˚ (total) angle makes for decent strength when employing thin panels with shallow dovetail trenches. Unlike carcase dovetails, the short grain issue is simply not a factor with a sliding dovetail.
Top

Thanks Chris! Much appreciated!

I will make a move toward the steeper bevels and return to cutting housings. These shallow bevels have caused me grief, if the dovetail does not fit incredibly tight at all areas it will pull out of the joint, certainly frustrating especially when all of the parts are near to completion.

I've resisted making the move because, while I have one plane that is an easy convert, the plane I prefer to use for the male part of the joint is going to take some more serious rework.

Have you found most dovetail making kanna to be cut for these steeper angles?

I've seen them without a housing in western carpentry work, but after you brought this up I am thinking that may be due to the fact that the average carpenter was not carrying a dovetail plane in his toolbox, likely he cut the angles with a standard set of planes and would saw the groove. Probably using the batten as a guide for sawing.
Top

I cut these with a router and router table nowadays, though to obtain a steeper angle bit I had to source tooling from Japan.

I once had a Japanese dovetail cutting plane, ari sakuri ganna, and I recall that it cut fairly steep dovetails - - and certainly wouldn't be hard to modify if you wanted to change angles.

The ideal sort of plane, I think, is one in which the same plane, with a fence swap, cuts both halves, like this one:

Notice that there is both a fence and a filler piece. 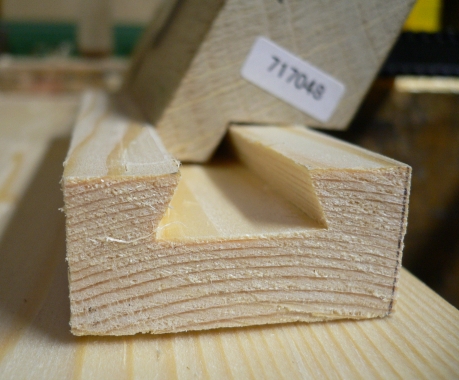 There are other styles of Japanese plane for cutting dovetails. One can also modify a shoulder plane, or groove side-cutting plane to work in the same capacity.
Top

Do you cut these joints with a taper?

Thanks for sharing those planes, and they do appear to favor a fairly steep angle. That plane also seems like a better approach than my two planes. The modified side rabbet cuts nicely the trench walls, but without a nicker it does not do a great job on the male portion of the joint. What I've done in the past is set my kebiki gauge to cut the shoulder as I work the sides of the male portion of the joint. I have another plane dedicated to the male part, but after muling things over it will be quite difficult to modify, it does however, do a very nice job of cutting the side and shoulder cleanly.

The steepest router bit I have for these is 14 degrees (I do actually own router bits,

). I may try that on my next set of doors in a trial run.
Top

If you want the 35˚ bits, they are 8mm shank, just FYI. I can order them anytime.

I don't taper the trenches.
Top

Good morning! I've detailed the process of drawer building for my cabinet, which was finally accepted by New Hope Arts. Now I can say I'm looking forward to the show. I'll be delivering it this weekend and so I'm going over some parts a little quicker than I normally do. I look forward to your comments.

Chris, I deployed your suggestions on sliding dovetails yesterday, making changes to my planes to allow them to cut steeper angles. I wasn't able to get 17.5 degrees out of the plane which cuts the male side, so I ended up at 14 degrees. I'm doing some sliding dovetails today, even getting these to 14 degrees has already been a tremendous improvement.

I'm able to make them to a point where they still move in the joint, so to allow panel movement, while remaining firm and tight up against the panel in the groove.

Much appreciated! Soon as I'm able to acquire a plane which allows me to cut 17.5 degree male dovetails I'll further modify the female plane, which is done with ease.

I also tuned them to be in sync with one another, and that may have helped a smidgen, I'd never actually checked them against one another prior, but 'knew' the to be the same degree.
Top
Post Reply
33 posts

Return to “Your Recent work”

Users browsing this forum: No registered users and 0 guests